Khajuraho belongs to the Bundelkhand region in Chhatarpur district in the Indian state of Madhya Pradesh. While the city has emerged as a major tourist destination on the map of India, it is home to some of most well preserved culinary secrets. Originally the home of the Chandela Rajput dynasty that ruled over the region, Khajuraho has always been a city much favored by the elite. 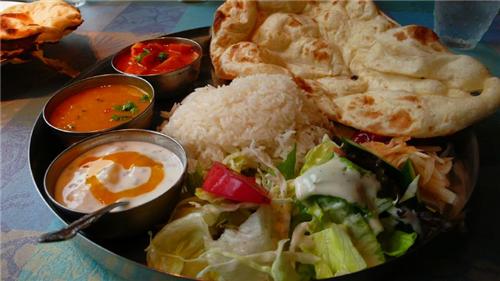 Today, it is a top tourist destination owing to the breathtaking temples and architectural splendor that marks the city. The culinary lineage of the city is still intact and can be seen in the humble homes, which take great pride in their traditional recipes and local produce. 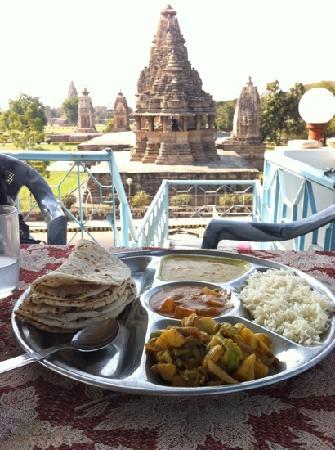 Hindu Rajput kings for much of its existence ruled Khajuraho and hence the predominant influence of vegetarian fare can be seen in the food here. The intermingling of Mughals and Rajputs also added to the palette of Khajurajo which saw the emergence of popular non vegetarian cuisines. The specialty of the cuisine of the region is the use of spices in their whole form and not the powdered versions of the spices making the food more delectable and drool worthy.

The most typical food that is eaten by every household in the region is the Bafla, which is essentially made of flour and butter. It is a softer version of the popular dal-bati. A normal everyday meal would consist of roti, dal, rice and vegetables. Jain style of cooking and its influence is still the predominant in the local food of the region. Traditionally food is prepared in earthen pots and is slow cooked to retain the flavor of the vegetables and the meats. Even today slow cooking on earthen pots is followed in most households.

Different varieties of river fish like rohu, pavada, singhada etc. are oft used in the cuisine here. Until the government banned it, deer meat was a delicacy and a local specialty. Pigeon, jungle folw, wild boar, quail etc also feature as delicacies on most menus in the region. Bhindi Gosht and Bundeli Gosht are the popular meat dishes of the region. Sweets form an important part of every meal and some of the most popular sweets are lavang lata, moong dal halwa, kusli, burfi etc. There is a local liquour available here which is made of date palm and Mahua flowers.

Use of Local Agricultural Produce

The region in the central heartland of India is home to some of the best coarse cereals grown in the country. Jowar, Bajra etc are the most used cereal flours. But this has now given way to use of wheat instead. Fresh vegetables are treated as a delicacy in itself and the local dish chikeriya tarkari is a much-favored delicacy. Green leafy vegetables are a mainstay in the local cuisine here. Mahua flowers are used as the natural sweetener in place of sugar making the sweets here a more healthy option. Paan or Betel leaves, which are grown in the region form the end of every meal and is also a part of the famed Indian hospitality.

Street food is an essential part of daily life for every India and it is the same in Khajuraho too. There are numerous street food joints in the popular tourist places in the city. Since most of the temples are silent zones, the street food hawkers are placed a little away from the main temples. Nevertheless, some of the most interesting food at pocket friendly prices can be had at any of the street corner outlets. Popular Indian chaats, bhajiyas, jalebis and other local delicacies like the dal bafla etc form the essential part of the menu here. 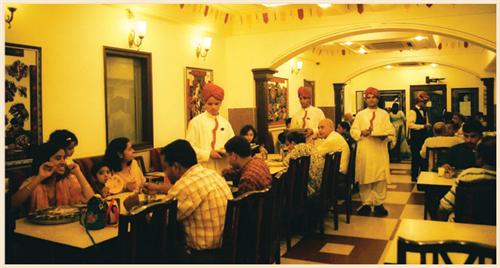 Since the city caters to a large multi-cultural, multi-ethnic influx of tourists, it has options for every need and every want. Right from affordable Italian to fine dine Indian, the city serves all and more to satisfy visiting tourists and visitors. The major luxury hotels in the city have in-house fine dining options and have a spread to pamper every taste bud. There is a distinct lack of fast food joints in the city but this can be overlooked because of the small cafes and bistros which dot the city and serve some of the best food across a variety of cuisines. There are some fast food restaurants in the region but compared to other cities they are limited in options and serves other food items also.